It's no secret. Professional video editors everywhere are irate at the newest edition to Apple's popular non-linear video editing software, Final Cut Pro X. As of right now, Final Cut Pro X has 503 five-star ratings in the Mac App Store. Not bad. But it also has 671 one-star ratings and 414 users who aren't sure what they think. It's such a bad update that it even earned itself a skit on Conan.

So, what happened with this version of Final Cut Pro? What did Apple do to screw things up? Basically, they forgot the "Pro" in Final Cut Pro. Instead of updating something that already worked for professional video editors, they rebuilt it from the ground up, dumping features and lowering the price to make it more attainable for amateur filmmakers and video hobbyists with immediate access to the Mac App Store on their computers. 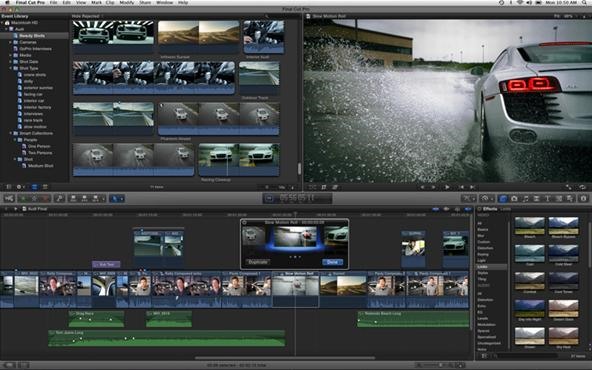 The download-only FCPX has some great new features, but the bad far outweighs the good. You can't import projects from previous versions of Final Cut Pro. EDL, XML and OMF is no longer supported. Nor is multicam editing and third-party hardware used for capture and output. Color has been shallowly integrated. There's no chapter markers. No time code sync. No real-time cross-fade rendering. No broadcast monitoring. It seems more like an update for Final Cut Express. Maybe even iMovie. But definitely not Final Cut Pro.

Apple has an "all sales final" policy in iTunes and the Mac App Store, but there's reports that some disgruntled users are getting full refunds for Final Cut Pro X as a "one time exception" to Apple's current policy. To address some of the problems above, Apple has put up a FAQ page on its website in an attempt to clear things up and give notice to future updates on the way.

But if that's not good enough for you, Avid is stepping up to the plate, offering disgruntled Final Cut Pro users a special crossgrade promotion that would let them switch over to Avid's Media Composer 5.5. It works on both Macs and PCs and supports a wide range of formats, multicam editing, easy media and project sharing, and integration with third-party systems, not to mention its interoperability with Pro Tools software, Symphony and Avid DS.

"Users who may be facing uncertainty now also have access to a Mac OS native industry-leading editing solution from Avid," noted Paul Foeckler from Avid.

It costs about $1,000, which is far less than its regular $2,500 price tag. The deal expires September 30, 2011. In order to switch over, you'll need a valid Final Cut Pro serial number (excluding Final Cut Pro X versions).

Not sure if you like the workflow of Media Composer or Premiere Pro? Check out some of the video tutorials (here and here) for some working examples.

Want to master Microsoft Excel and take your work-from-home job prospects to the next level? Jump-start your career with our Premium A-to-Z Microsoft Excel Training Bundle from the new Gadget Hacks Shop and get lifetime access to more than 40 hours of Basic to Advanced instruction on functions, formula, tools, and more.

Other worthwhile deals to check out: